I had the pleasure of meeting Captain Charles Moore whilst in Tokyo prior to the Algalita/5Gyres Tsunami Debris Research Expedition.  He was speaking at the TUAT (Tokyo University of Agriculture & Technology) Plastic Symposium which I attended.  Upon hearing about his upcoming ‘Plastic Pollution Coversation’ that he was taking on the Pacific Rim Tour to promote his book ‘Plastic Ocean’ I thought how much of an opportunity it would be to have him in Hong Kong too.  Whilst he is here he will speak with a number of universities and schools and will reach an audience well over 1000 people.  For the students to have a chance to hear about his research and findings on plastic pollution over the years will be very inspiring.  Especially as so many people in HK are now aware of the plastic pollution issues with his visit coinciding with the plastic pellet spill.

Therefore, I am very excited to anounce that he will be in HK next week from the 12th – 17th of September.  He will be attending a number of events open to the public as listed below. 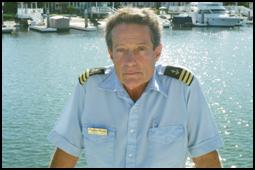 A third generation resident of Long Beach, California,  Captain Charles Moore founded  Algalita Marine Research Institute in 1994.  After a 1997 yacht race to Hawaii, Captain Moore veered  from the usual sea route and saw an ocean he had never known. “Every time  I came on deck to survey the horizon, I saw a soap bottle, bottle cap or a  shard of plastic waste bobbing by. Here I was in the middle of the ocean  and there was nowhere I could go to avoid the plastic.” Ever since,  Captain Moore has dedicated his time and resources to understanding and  remediating the ocean’s plastic load. Along with collaborators from the  Southern California Coastal Water Research Project he developed protocols for  monitoring marine and beach micro-plastics which are now used worldwide.

He is the lead author of two scientific papers published in Marine Pollution  Bulletin:

The first paper documented his 1999 study, which shocked the scientific world  when it found 6 times more plastic fragments by weight in the central Pacific  than the associated zooplankton. His second paper found that plastic outweighs  plankton by a factor of 2.5 in the near coastal surface waters of Southern  California.

He also is the sole author of a review article in the October 2008 issue of Environmental  Research, “Synthetic polymers in the marine environment: A rapidly  increasing, long term threat,” and along with Richard Thompson, Fred vom Saal, and  Shanna Swan, edited the July 27, 2009 Theme issue of the Philosophical  Transactions of the Royal Society B titled “Plastics, the environment and  human health.”

To date, Captain Moore has conducted ocean and coastal sampling for plastic  fragments through more than 40,000 miles of the North Pacific Ocean, across 22  degrees of latitude and 70 degrees of longitude. His latest 10,000 mile voyage  took him and his crew two-thirds of the way to Japan across the International  Dateline. Captain Moore’s work has been highlighted in numerous major media  outlets, including ABC’s Nightline, Good Morning America, National Public  Radio, Rolling Stone, and The Wall Street Journal.